Picture it Painted: A fresh look in the alleyways 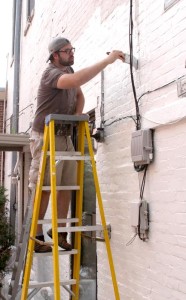 The smell of fresh paint filled the air behind the Wise Penny thrift store Thursday evening as the brick was transformed with a coat of whipped cream topping-colored paint.

Anthony Nemcek, Red Wing Downtown Main Street vice president and the driving force behind the painting project, along with Mayor Dan Bender and others showed up for the first painting event.

Nemcek said one of the contributing factors to his idea to focus on painting the downtown alleys is the 2015 reconstruction on Highway 61, during which Red Wing will lose a lot of its on-street parking and front door traffic for some businesses.

“We can’t just let it catch us flat-footed,” Nemcek said.

Nemcek said the grant process wasn’t too consuming, but the organization did need a plan for the how the paint would be used. He said members scouted the buildings before applying and, come October, they need a report with photos of the finished project, and other components such as number of volunteers and volunteer hours.

Nemcek said he hopes to have the project completed by September and plans on scheduling more painting days with one tentatively planned for Thursday July 24.

“It’s a really visible way for us to show we’re involved in the downtown area,” he said.

Read the original article on the Republican Eagle website